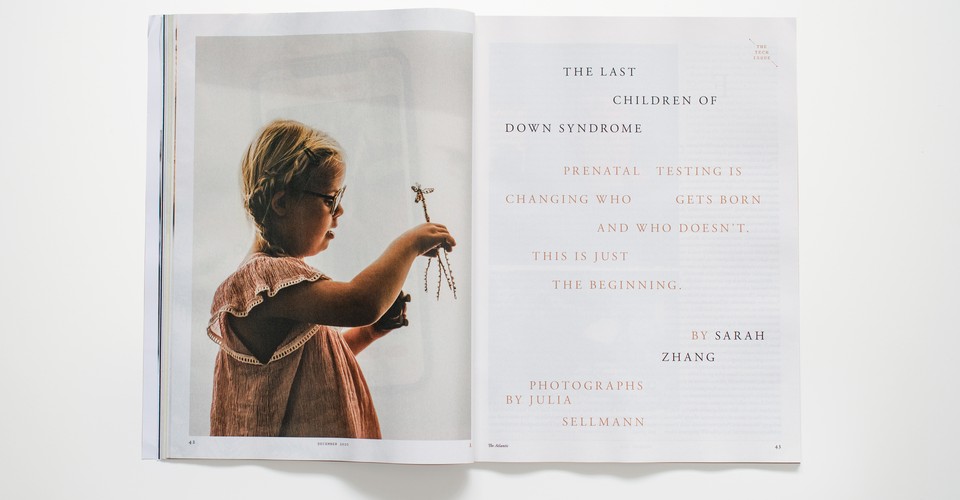 The March 2021 issue of Atlantic: the Commons

The last children with Down’s syndrome

Prenatal testing changes who is born and who does not, Sarah Zhang wrote in the December issue. This is just the beginning.

â€œThe Last Children of Down Syndromeâ€ was well written, inspiring and moving. I did not have a prenatal test and at 29 I gave birth to a son with Down’s syndrome. It was a shock, to say the least. I’m so glad I didn’t know he had Down syndrome while I was pregnant; maybe her father and I made the wrong decision and terminated the pregnancy.

Eric, now 32, has not experienced any major health problems but has struggled throughout his life. But which child has not had challenges? I am grateful to him every day. He’s friendly, funny, cranky, caring and the best thing that ever happened to our family. He maintains meaningful relationships with his family and colleagues. I’m a better person because of him. I have a lot more tolerance for others, patience, empathy and acceptance.

Thank you for sharing this sensitive and balanced article on Down syndrome. My eyes first opened to Down’s syndrome when, as a third year medical student, I interviewed a 42-year-old pregnant woman. â€œDid you do a prenatal test? ” I asked. “No,” she replied. â€œMy first child has Down syndrome. I wouldn’t trade it for the world.

Today, as a wiser 35-year-old pediatrician, I have treated dozens of children with Down’s syndrome. Despite their myriad medical challenges, they taught me more about love and family than I could have imagined. They are also some of the most emotionally intelligent people I have ever known.

As a longtime prenatal genetic counselor, I am moved to ask why the conversation about prenatal diagnosis is still focused on the abortion of babies with Down syndrome. There is so much more to this problem.

Some American women, many in my own practice, undertake prenatal screening in order to be aware and begin to learn about their child’s condition. Obstetric care and plans for childbirth and newborn care are often different if Down syndrome or structural differences are known before birth. For example, identifying cardiac abnormalities that will require immediate postnatal surgery allows delivery in a hospital with a pediatric cardiac surgeon, and third trimester monitoring of a fetus with Down syndrome reduces the risk of stillbirth.

Many more fetal conditions are detected before birth, and a small but growing number lend themselves to prenatal treatment. Fetal surgery for spina bifida improves outcomes for affected children, and life-saving fetal therapy is available for babies with severe congenital diaphragmatic hernia. There is no doubt, however, that the availability of such therapy is limited, and there are indeed inequalities as to who can benefit from it.

Parents and professionals should consider the potential benefits and risks of using prenatal and preimplantation genetic testing, and providers should counsel each patient with full information, care, and respect. But we must stop limiting the discourse on prenatal testing to the inflammatory issue of abortion.

Sarah Zhang’s article misses a key consideration for parents trying to decide whether to carry to term a pregnancy that would result in a child with Down syndrome. When parents choose to have a child with Down’s syndrome, they are not just committing to raising that person until they reach the end of their lives themselves; they also engage their other children in parenting. When my mother had a stroke at 88, the role of parenting my brother fell on me. I have taken on this responsibility willingly and with pleasure. Not a day goes by that I am not involved in some aspect of my brother’s parenting.

My love for my brother has no limits or conditions. I would do anything to protect him from harm. But as I get older myself, I can’t help but worry about what would happen to him if something happened to me.

I am not talking about it to say that abortion is the right solution every time a fetus is diagnosed with Down syndrome. But it is unfair to call the choice to terminate a pregnancy with Down’s syndrome the “canary in the coal mine” or a step towards made-to-measure babies.

The existential despair of Rudolph the red nosed reindeer

In December, Caitlin Flanagan revisited “the most disturbing Christmas special.”

Everything Ms. Flanagan writes about the show is true. Both Santa Claus and the Comet behave in abominable ways. Donner is a chauvinistic jerk. Even Sam the Snowman isn’t above criticism – his obsession with silver and gold sure isn’t healthy.

Yet, they’re not the reason we watched the show faithfully when we were kids. We savored the unforgettable lines of Hermey, Rudolph and Yukon Cornelius. Even now, not a year goes by without a member of my family saying, “Let’s be independent together” or “Don’t you know that bumblebees bounce?”

If I can defer to the school of criticism of the reader’s response, I would only say that we each have our own Rodolphe, none more or less precise than the other. Let us honor Rodolphe in our hearts, and try to keep him all year long.

Distance education has been a misery, wrote Erika Christakis in December, but it offers a rare chance to completely rethink preschool education. Here, she answers a reader’s questions about her essay.

Question: I enjoyed this article and agree with it, especially his observation that schools have remained the same despite our altered understanding of childhood development. What could the reforms look like in concrete terms? If you had the money, control and support, what would your ideal school look like? – Douglas baker, Pittsburgh, Pennsylvania.

A: Effective educators, research teaches us, value knowledge about child development at two levels: the general (â€œWhat does a 6-year-old look like?â€) And the specific (â€œHow does this 6-year-old think? and learning? â€). This deep understanding of childhood and children calls us to re-imagine the overwhelming uniformity of so many school standards and policies (such as invariable school schedules and calendars) that poorly serve the disparate needs of children and families – and often the needs of their teachers, too. If tailor-made programming seems too radical, we could abandon our sectarian dedication to homework, which weighs on children of all socio-economic and learning backgrounds by fueling the specious idea that ‘learning’ happens under auspices of an institution, rather than in the unlimited human brain. Some children need to be left alone after a long day at school to enjoy their learning mojo; others may need much more comprehensive support to unlock their potential than what is found in a pack of multiplication flash cards. Adults often balk at this type of personalized education, and the challenges should not be downplayed. But in the long run, it is surely easier and more profitable to educate the individual than to continue to stumble upon the realities of human development.

To mark the launch of the â€œInheritanceâ€ project, we commissioned photographer Aaron Turner to create this month’s cover. Turner’s work is concerned with race and history as it visually represents the relationship between past and present. For the cover, he started with a 1965 Dan Budnik photo of young people in Selma demanding the right to vote for their parents and teachers. The resulting image conveys both resilience and fragmentation, lingering themes in our collective American history.

The print version of the “COVID-19 Manhattan Project” (January / February 2021) reported Moderna and Pfizer / BioNTech vaccines to be 95% effective in preventing COVID-19 infections. In fact, vaccines prevent disease, not infection.