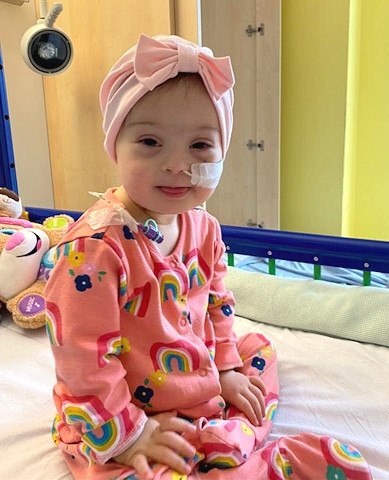 A fundraiser was organized to help cover the cost of a funeral for a local little girl.

With her parents by her side, 2-year-old Daisy Taylor lost her courageous battle with cancer in the early hours of Monday, July 26.

After her family received the devastating news that Daisy was suffering from acute myeloid leukemia in February, the 2-year-old has undergone intensive chemotherapy for the past five months and a bone marrow transplant to help her fight the diagnosis.

Lance Taylor, Daisy’s father, shared part of his daughter’s story: â€œDaisy was born with Down syndrome, we were diagnosed at birth. She also had some problems when she was born, which led to her having an operation for a colostomy when she was two days old.

“Last year [2020], she underwent two major operations to help her and finally reverse her colostomy. My wife had to be alone with her during these operations because I was not allowed to enter the hospital due to Covid-19. “

Two months before Daisy’s second birthday, in February 2021, a small, speckled rash formed on her legs that didn’t go away under a drink, so Daisy’s parents – Lance and Toni – took her to A&E with the suspicion that she had meningitis.

â€œHours later, my wife (who was alone with her again due to Covid) learned the devastating news that our 22-month-old baby was suffering from AML – acute myeloid leukemia,â€ Lance said.

Sadly, five months after her diagnosis, Daisy passed away.

To celebrate Daisy’s life, Lyndsey Webster organized a sponsored walk from Rochdale to Hebden Bridge and back, with all donations going to the little girl’s funeral.

The walk will begin at Rochdale’s Regal Moon at 9 a.m. on Sunday, August 29.

Around 1pm / 1.30pm there will be a lunch break at Stubbing Wharf, Hebden Bridge, near the canal.

Lyndsey, a close friend of parents Toni and Lance, said: â€œEveryone is welcome to join us, for the whole walk or just a game, even if you just want to cheer us on.

â€œI decided to organize a march to show our support for what they were going through and to try to raise money to help them, as none of them have been able to work since February after being in the Daisy’s bedside the whole time.

â€œWe are all heartbroken by this tragic loss, as Daisy touched the hearts of so many people she knew and also those who have followed her story of strength and bravery. I have never seen a little girl have so much fighting in her, she will always be Daisy the warrior for me.

“I know there is nothing anyone can do or say to ease the pain that Toni, Lance, Ellie and Ethan have to go through right now, but we want to show our support and that we are on their side, them. all crying.

â€œAll donations will go towards Daisy’s funeral and celebration of life.

â€œPlease dig deep, this little girl deserves the best celebration we can give her. “

You can donate to the GoFundMe page here: