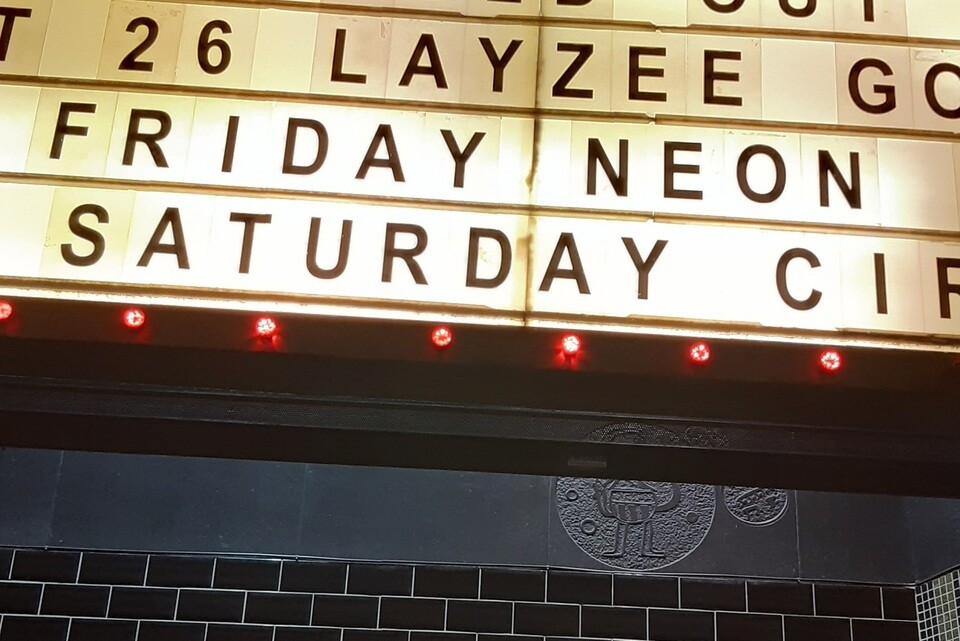 On Middle Abbey Street, a venue’s marquee conceals a cheerful work of art

In the evening, the lights come on behind the retro marquee that hangs above the entrance to the Academy on Middle Abbey Street.

During the pandemic, he hosted comments on the latest buzz stories, jokes that mimicked the tweets of an insane Dubliner and, invariably, spread rapidly over time.

Before this sign was erected, the face of the building was defined by a less ostentatious display. For years, its main marker was a sculpted relief.

The work, which predates the Academy and today is mostly hidden behind the sign and a shutter, is a series of circular images carved into limestone panels above the entrance doors.

Each panel represents either an instrument or a smiling musician. One plays a violin, another beats a bodhran.

The figures are composed of thick lines, with round bodies and misshapen limbs. Their forms are not realistic, but simplistic and surreal.

From the street, a single character emerges, that of a flautist. Her arms protrude from her hips and her eighth notes float in the air.

What she does, however, won’t be obvious to most passers-by. The shutter, even rolled up, obscures most of its body.

But ticket holders who look up in the brief moment they step out of line and into the reception area may catch her and the other characters playing.

Created in the late 90s, the original relief was once twice as large, covering almost half of the main facade.

When the room was taken over by its current owners, Shine Production, the lower part was replaced by generic tiles, including the bit bearing the name of the artist: Georgie McCutcheon.

A painter, sculptor and disability and arts activist, McCutcheon was born in 1958 to parents who were agricultural nobility in Tipperary.

He was born with Down’s Syndrome, and before he was a year old McCutcheon was sent to Sunbeam House, which was at the time an orphanage and home for mentally challenged children in Bray.

“He never knew his family,” says Gladys Lydon, a lifelong friend and co-founder of Camphill Ballytobin, an intentional community for people with disabilities in Kilkenny.

“He was a very helpless person. You must have known that when you met him. He was outgoing, talkative and confident,” she says, “but he had a vulnerable side.”

In his early teens, McCutcheon often traveled to Wexford, spending his summer holidays with friends living in Camphill Duffcarrig, a similar community outside Gorey.

There, he befriends a volunteer, Patrick Lydon, Gladys’ late husband.

Patrick Lydon was originally from Massachusetts and had left the United States as a conscientious objector to the Vietnam War. He joined Duffcarrig in 1972.

Lydon died in January of this year. But six months before his death, he spoke of meeting McCutcheon for the first time. He was, says Lydon, “a ball of energy full of mischief”.

“He was fiery,” Lydon said with a laugh. “I liked that stuff.”

When McCutcheon moved to Duffcarrig, Patrick had already gone to work in a Camphill community in Aberdeen.

Then in 1979, once Patrick returned to Ireland with Gladys to stage Ballytobin, he crossed paths with the artist again. McCutcheon finally went to live with the couple in 1982.

“We always intended Ballytobin to be a place for children,” says Gladys. “But some adults were living with us as helpers and Georgie came as a helper. He was a great gift.

Every day, Gladys says, McCutcheon helped her prepare lunch for 24 of the community’s residents. He cared for his young children, answered telephone calls and, in his spare time, practiced his art.

“It had a drawing phase on slates,” Gladys explains, “and came into cardboard, three-dimensional pieces held together by Sellotape.”

Often he created sculptures as gifts for specific occasions, she says. At one point, he built a miniature slide for Gladys’ daughter’s guinea pig.

Crosses were a recurring motif in McCutcheon’s work, she says. “They almost always had a religious theme. Three crosses.

Another recurring image was the sun, says Paul Bokslag, a painter based in Kilkenny.

The power of the sun was really tied to McCutcheon’s work, he says. “It’s heat and food. Sometimes he put a face to it. He had a really special visual vocabulary.

McCutcheon was influenced by the Spanish painter Joan Miró, whose hard-to-classify work explored the subconscious through bright, bold colors and abstract figures.

In the late ’80s, as McCutcheon was refining his own style, Patrick sought to find him a mentor, Gladys says. Patrick called upon local artists to teach him drawing from life, assembling mosaics and pouring concrete.

Lambert brought McCutcheon to his studio, he says. It was there that together they made the relief of Middle Abbey Street.

McCutcheon painted the images, which Lambert, his apprentices, and McCutcheon chiseled and sandblasted onto limestone.

It took a few years, says Lambert. The couple also made a carved high cross for a community theater in Ballytobin.

In 1999 McCutcheon’s relief was unveiled as part of the Hot Press Irish Music Hall of Fame, a memorabilia museum of Ireland’s musical history.

Lambert and McCutcheon flew to Dublin for the event, Lambert said. “The Corrs drummer had her hand cast in stone. Georgie always rose to these kinds of occasions. At openings, he was always talking about what he was doing.

The Hall of Fame closed at the end of 2001 and was replaced by the Spirit nightclub.

In 2007, the Academy opened in its place. Until 2014, the McCutcheon landform was fully visible, although the surface was white with efflorescence.

Then, in September 2014, the management of The Academy changed. According to a press release, the venue has been refurbished in a “Victorian music hall style”. During this process, six of the limestone panels were removed, including those containing a violinist, dancers and a saxophonist next to McCutcheon’s signature.

The Academy did not respond to questions about the destination of the signs.

Bokslag and Lambert assume they were lost or destroyed, they say – but they are optimistic about it.

“With anything in the public domain that I’m involved in, I tend to give up,” Lambert says.

“I did a sculpture for Collins Barracks, for the monument there, and a few years later I went back to see it and it was totally vandalized,” he says. “I let things happen.”

In the second half of his life, McCutcheon moved to Callan, a neighboring town to Ballytobin, Bokslag says.

There, Bokslag says, he helped Patrick, Gladys and other Camphill associates found the Kilkenny Collective for Arts and Talent, an inclusive arts center for people of all abilities.

When the KCAT Art and Study Center opened in 1999, McCutcheon was christened his “father” – around the same time he began to refer to himself as Lydon-McCutcheon.

His works have been exhibited in Germany, the Netherlands, Sweden and the United States, according to the KCAT website. His show in the United States took place at Patrick Lydon’s alma mater, Phillips Exeter Academy in New Hampshire, Bokslag said.

In 2014, McCutcheon had a retrospective at KCAT and, according to Gladys, two of her biological brothers visited the show.

“I said to one of his brothers, ‘It would be great to meet you and tell you about Georgie, because he had a good life,'” Gladys says. “But they chose not to meet him. Both saw him from afar and bought much of his work.

Gladys says a brother told her they had memories of McCutcheon as a baby and after he was taken away he was not talked about in the house.

“The family situation was very sad,” she says. “But that was the time. It was something not to be judged.”

McCutcheon was diagnosed with dementia and died in October 2015, aged 57.

“I think he would have died of dementia years ago, if he hadn’t been an artist,” says Gladys. “It was amazing to see how he was driven to do art every day for the past 15 years.”

McCutcheon was a legend, says Pádraig Naughton, director of Arts and Disability Ireland. “He paved the way for a generation of artists.”

He was the inspiration and driving force behind what KCAT is today, says Naughton. “And he was an incredible spokesperson and representative for KCAT, who was very difficult to replace.”

According to Bokslag, one of Patrick Lydon’s last statements in the days before his own death “was that he was looking forward to seeing Georgie again”.

Bokslag still misses McCutcheon, he says. “He was such an inspiring and lively person. People reacted to that.”