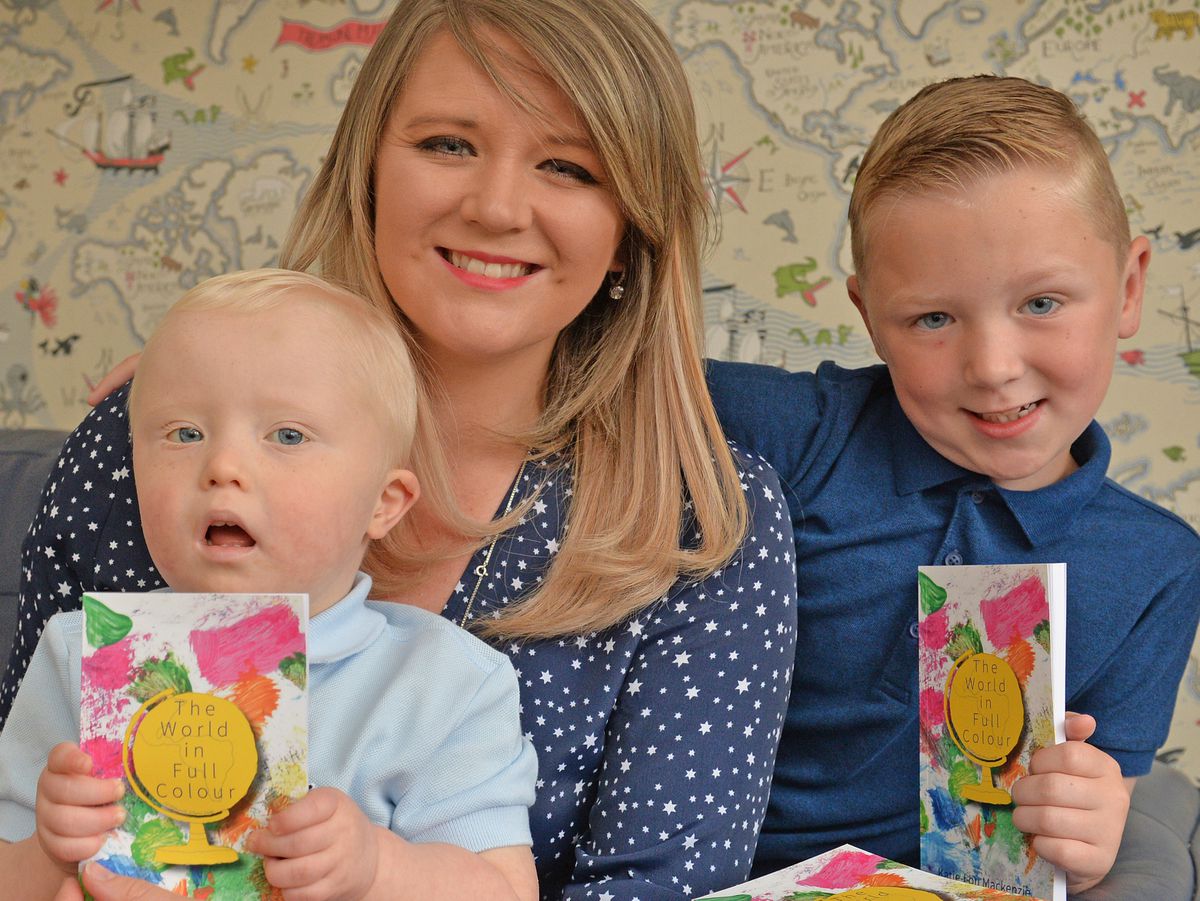 Katie-Lou Mackenzie, from Lawley, Telford, has written and published her book ‘The World in Colour’ – while telling her story of her journey as part of the book launch – with the aim of supporting others who may be earlier on in their journey.

Katie-Lou, 34, chose to write the book through the eyes of a brother of a child with Down syndrome because she believed siblings can often be overlooked.

Katie-Lou and her husband James were thrilled when they conceived their second baby – a sibling for their seven-year-old son Jack, who is the inspiration behind the book.

The couple had all the tests offered and the risk of Down syndrome was low and no problems were detected on the scans.

However, hours after baby Alfie was born, they received some unexpected news.

Katie-Lou – who was alone in hospital at the time and had only slept for a few hours – was told their son likely had Down syndrome.

“We had the tests while I was pregnant and there were no concerns. The only thing they said was that the baby’s legs were short, but no one said what it could mean.

“The specialist checked everything because babies with Down’s syndrome usually have signs that indicate Down’s syndrome, such as an extra rolling in the back of the neck or heart problems and he didn’t have that, but they never mentioned the words Down syndrome and we don’t know nothing about it.

“They just said he would never be a basketball player but he’s doing great. They asked how tall our family members were and we all said the baby just had short legs like the rest of the family. “

“Then he was born and he was rushed with severe blue light jaundice. No one said anything and jaundice is quite common so again we had nothing to worry about.

“Alfie was born just before 6pm and James came home as the visits were over and I stayed awake with Alfie. I had just fallen asleep, then at 3 am I was woken up and asked to sign something about Alfie. They said they had to do an emergency blood swap – take the bad blood out and put in the good blood.

“I remember asking if he was okay and they just said it was very important that they do the blood exchange straight away.

“I asked, ‘Is it because of the jaundice?’ and the staff said “No, it’s because of trisomy 21“. I remember saying I didn’t know what it was and I had never heard of it and they said “that’s the medical term for Down’s syndrome” and that’s how I discovered – alone, emotional and sleep deprived.

“I was taking all of this with only a few hours of sleep and then I was told to come back down – it was awful. Alfie had the tests done and the results took five days to come back to confirm.

“The results came in the day before bringing him home. He was tube fed for five days in hospital and he was bottle fed and they said he probably wouldn’t do that and he might have trouble eating – he was proving everyone wrong five days – anyone who knows Alfie knows he loves cakes and cookies and knows how to ask for them too.”

Katie-Lou said she wants other parents going through the experience to know that they are not alone – and that their emotions are normal.

She said: ‘I cried constantly and cried for six months afterwards too. I loved him from the day I saw him – he didn’t look any different than Jack as a newborn, but every time someone got married or had a baby, I couldn’t can’t help but think “Alfie will never do that”.

“I love my job and thought I was going to have to give it up to be his full time carer, move for specialist care and equipment and was worried I had ruined Jack’s life because he had become a carer overnight. As parents, we had to learn to take care of Alfie overnight – he ate differently, he needed to be held differently and we didn’t know what to do or when.

“You are grieving for the child you thought you had – like all new parents, I had gone through so many stages in my head for Alfie, I had planned his whole life during the nine months I carried him. But why put your dreams on your child?Just because you have a daughter doesn’t mean you’re going to be the mother of the bride.

“In your head, you are planning your child’s life before it is even born, but of course you don’t know it’s going to happen like this.

“My opinion of Down syndrome was really old fashioned. I didn’t really know anyone and had only seen really old photos from years ago, but I started reading the blogs and stories of other moms who helped me tremendously.It was also a roller coaster of emotions and mental and physical challenges.

Katie-Lou said the support from both their families has been overwhelming, as well as from the community, including members of Jack’s football team who learned Makaton so they could communicate with Alfie, while the Jack’s Lightmoor Primary School and Alfie’s ABC Lightmoor Nursery both brought Makaton into their learning and play too.

Katie-Lou said: ‘I’ll never forget when Jack was talking about superheroes and I said they don’t all wear capes or fly and Jack said ‘I know – they might have the syndrome of Down. and it made me realize what an incredible bond they have as brothers and how Jack sees Alf.

“It’s scary to have a child with a genetic condition like Down’s Syndrome, but I wish everyone could see the world as positively as Alfie.

“Alfie has all the different emotions like us and he is so stubborn! He has a beautiful smile and has developed so much that he is starting to walk and definitely knows how to tell us what he wants now using Makaton sign language.”

Katie-Lou says a shopping trip can be a long one as Alfie wins the hearts of everyone he meets and urges people not to be afraid to offend and to ask questions so that knowledge of Down syndrome can be shared.

She said: “We say if we walk out of the supermarket without making 10 new friends, we’ve had a bad trip.”

Katie-Lou also runs a Facebook page called ‘Nothing Down Here But Love’ which shows Alfie’s journey and the blonde-haired, blue-eyed toddler has also just won a modeling contract.

She said: ‘The Facebook page came about after Alfie’s speech therapist asked him about the different things he was doing around the house so I started making videos and that was it. there – I love it.

“If anyone who has found out their unborn baby or newborn has Down Syndrome and sees what Alfie can do and how happy he is, that might be a comfort to them.

“It also shows the other kids how amazing he is. We just found out he has a modeling contract with a London agency, so hopefully he’ll be modeling for some big brands soon.

“It’s great that the perception of disabilities in the media has changed over the years and that the talents and abilities of all young people and adults are beginning to be recognised.

“We want Alfie to show the world exactly what he can do – we say he will change the world. We want him to be able to live independently in the future and find a job, but health and happiness are the most important things.

Katie-Lou is already helping spread the message to employers through the Down’s Syndrome Association’s Work Fit employment program. Trisomy 21″ to raise awareness and funds for Down syndrome charities.

“The World of Full Colour” is a light and positive story, which takes the reader on a journey, demonstrating that “perfection” can be what we want it to be if we open our eyes.

The story is full of achievement, love, inclusion and different perspectives on the world, where a cheeky and headstrong little boy named George and his brother James achieve their big dreams with the help of a little magic from their eccentric great-grandfather.

Showing the cover of the book, which was designed using Alfie and Jack’s illustrations, Katie-Lou said: ‘I had the idea to write a book when I came back from vacation and then I kept developing it in my head and I didn’t tell anyone – I thought JK Rowling wrote books, I didn’t.

“Alf gets up early so I was up too and I wrote the first chapter and I thought if it didn’t happen or if I finished it but it wasn’t going anywhere then at least it was a kind of therapy for me and helping me manage my emotions.

“I found lots of blogs, adult factual books and picture books but most were in other countries or something I didn’t want to read and nothing from people in the UK and nothing that was through the eyes of siblings or aimed at young adults.

“I wanted something light and similar elements to what I thought – I started, got excited and kept going until I was done.”

The book is based on Jack and Alfie but uses their middle names and becomes a fictional book as it outgrows the two children’s ages.