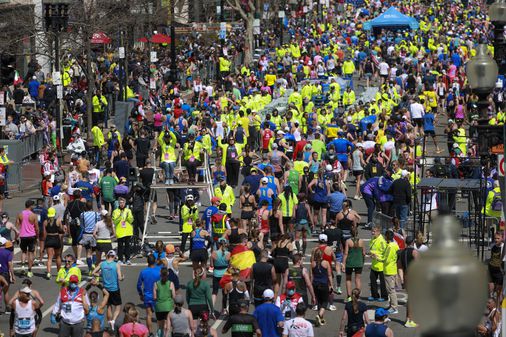 “It is the day to live.” The region basks back in the atmosphere of Patriots Day.

It was a day of renewal in more ways than one. Nine years after the Boston Marathon bombing, a woman, Adrianne Haslet, who lost a leg in the attack, ran the race. Henry Richard also ran to honor the memory of his younger brother, Martin, who was killed.

After the difficult years of COVID and with the memory of the 2013 attack lingering, Monday seemed like the day the city needed – and deserved. The sky was clear, a cool breeze was blowing and the temperature was 50 degrees, although it was even hotter in the sun.

In Kenmore Square, an MIT fraternity, Phi Sigma Kappa, with its blaring stereo system, threw a party that spilled onto the sidewalk. “This is the day to live for,” said a fraternity brother. Nearby, spectators cheered as the runners marched past, the roar of the crowd at Fenway forming a loud counterpoint at times.

Throughout the course, the atmosphere was, once again, festive.

In Hopkinton, even before the tee shot sounded, the party was in full swing at Todd and Laura Wauters on Grove Street, near the Athletes’ Village. By 9 a.m., about 25 friends had gathered in the front yard to cheer on the hundreds of runners heading to the start.

“It’s a great time,” Todd said as speakers played Boston’s “More Than A Feeling” and party guests offered runners coffee and use of the bathroom.

Just past mile 12, in Wellesley, students lined Central Street to form the “Scream Tunnel”. The scene lived up to its name with dozens of students shouting at the top of their voices and encouraging the runners by their first names, which they read on their bibs.

Olivia Fennell, a senior at Wellesley College, said both of her mothers went to Wellesley and told her stories of encouraging marathon runners.

“It’s like carrying on a tradition,” Fennell said. “And I think this year in particular, people are really excited to go out, have fun after not having done so for years. There’s definitely a real sense of community and excitement to be had. to be a part of.

As always, spectators got creative with their billboards and Sharpies. The signs ranged from inspirational – ‘Beat this Hill’, at the foot of Heartbreak Hill – to comical – ‘Kissing Me > Runner’s High’ near Wellesley College.

The weirdest sign, if you can even call it that, was a giant print of Will Smith’s face, held aloft by a spectator running along the race at Natick. Runners slapped each other as they ran for a laugh or an adrenaline rush.

In Boston, spectators lined Commonwealth Avenue near the finish line screamed as the elite runners approached. Kenya’s Evans Chebet – who clocked the fastest marathon time of 2020 at the Valencia Marathon – reached Back Bay with a substantial lead and held on to win the men’s race by 30 seconds.

Shortly after, the two leading women, Peres Jepchirchir of Kenya and Ababel Yeshaneh of Ethiopia, raced down Commonwealth Avenue, adapting to each other’s step, step by step. Jepchirchir, an Olympic gold medalist in Tokyo, edged Yeshaneh after a dramatic duel down the home stretch to win by four seconds.

The women’s and men’s wheelchair races were won by Manuela Schär, her fourth victory in Boston, and Daniel Romanchuk, her second.

The 2022 marathon marks the 50th anniversary of a historic milestone: the first Boston Marathon, in 1972, in which the Boston Athletic Association allowed women to compete.

Val Rogosheske, 25 at the time, was one of eight riders in this first sanctioned women’s field. On Monday she was back, taking to the start line at Hopkinton (and wearing the 1972 bib). Six and a half hours later, she crossed the finish line, alongside her daughters, Abigail and Allie, and her cousin Kris Swanson.

“It’s pretty crazy to start with eight women and then see all these women on the street,” she said. (About 14,000 women have run the marathon this year.) “I’ve never seen so many women on a marathon course with me before,” she said.

The Marathon has always been a source of inspiring stories and achievements. Monday was no different.

Among the competitors was Chris Nikic. In 2020, Nikic became the first person with Down syndrome to complete an Ironman triathlon, an unlikely feat for someone who couldn’t walk until he was 4 years old and struggled with walking. balance throughout his life. On Monday, he completed the marathon, averaging just over 13 mile minutes for over five and a half hours. He wore bib number 321 – representing trisomy-21, the chromosomal abnormality that causes Down syndrome.

On Beacon Street in Brookline, Ann Marie Russell, 49, and her 18-year-old daughter Kaitlin, who has Down syndrome, waited for Nikic to pass. “It’s really remarkable,” Russell said.

“It gives parents a lot of hope,” added her friend, Kaitlin Conneely, who is also the mother of a child with Down syndrome.

Henry Richard, 20 and a student at Pace University, had watched the marathon at the finish line many times since his brother was killed in 2013. He decided 2022 was the year he finally would himself. After finishing the race in just over four hours, he hugged his parents with tears in his eyes.

“I know if [Martin] was here, whether it was this year or the next few years to come, he would have done it with me,” Richard said. “That’s all I could think of.”

For Adrianne Haslet, crossing the finish line marked the culmination of many arduous journeys. A ballroom dancer, Haslet, now 41, lost a leg in the 2013 attack. After running the marathon in 2016, she was hit by a car in 2019 and seriously injured. On Monday, she rang alongside Shalane Flanagan, her guide and Olympic medalist in cross-country running.

Choking at the finish line, Haslet told WBZ, “It was the best day of my life.”

Ahead of the race, Massachusetts State Police officials said they were unaware of any credible threats, but officers, both in uniform and in plainclothes, were lining the course to provide security. Military police in combat fatigues and holding rifles were also there.

At the finish line, there seemed to be no worries in the world. Around noon, former acting Boston mayor Kim Janey held up a smartphone to take a smiling selfie alongside current mayor Michelle Wu and former mayor and current U.S. Secretary of Labor Marty Walsh.

However, not everyone was smiling. Tracey Lloyd, 55 from the UK, kept her remarks short and to the point after finishing in a respectable time of 4:18. “I absolutely hated every minute of it,” she said.

Still, she said there was a silver lining.

“What I did was I met some amazing people,” Lloyd said. “You meet them on the bus. You meet them online. The running community is so supportive and so amazing.

Taylor Dolven and Tonya Alanez of Globe staff, along with correspondents Grace Gilson and Sarah Barber, contributed to this report.

Mike Damiano can be contacted at [email protected]