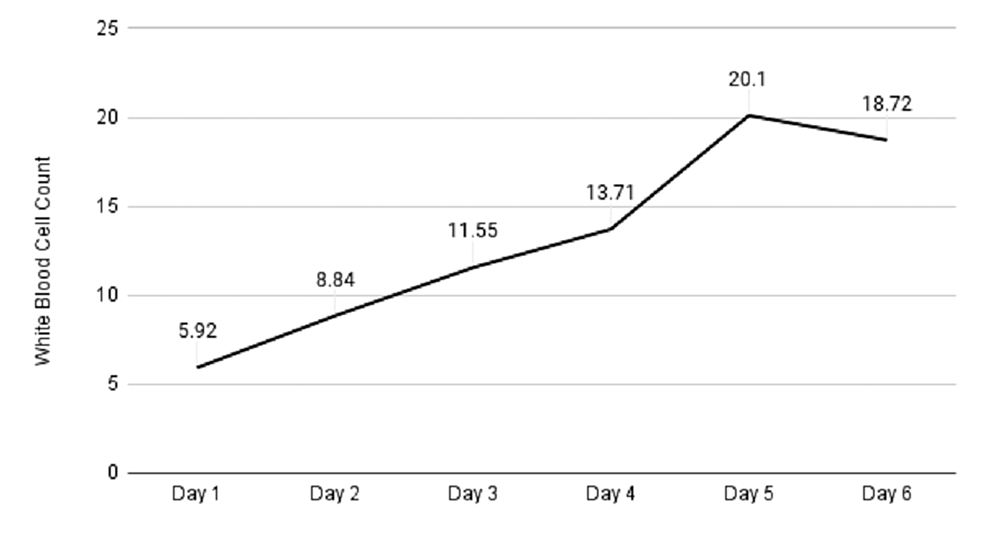 We present a patient who was admitted with cellulitis of the lower extremities and was found to have group C Streptococcus bacteremia causing toxic shock syndrome. Our patient was started on appropriate antibiotics, which included piperacillin/tazobactam, vancomycin and clindamycin for suspected cellulitis, and was later switched to meropenem on day two when she was found to have cellulitis. Gram-positive bacteremia group C and was treated for 14 days. In addition, she was initiated on a three-day regimen of intravenous immunoglobulin (IVIg) as adjunctive treatment for the worsening clinical condition of toxic shock syndrome. Our patient survived up to 46 days after admission but ultimately succumbed to her illness. It should be noted that the addition of IVIG could have prolonged his survival. We emphasize the importance of prompt diagnosis and treatment with antibiotics and IVIG to help prevent mortality from this disease.

According to the 1996 classification, Streptococcus dysgalactiae subspecies equisimili (SDSE), is one of the two Lansfield groups, group C and G streptococci. This bacterium is part of the human flora in the upper respiratory tract, skin, gastrointestinal tract and female genital tract. Clinically it has been associated with a wide range of skin and soft tissue infections such as impetigo, cellulitis and necrotizing fasciitis. [1-6]. It has also been associated with bacteremia, osteomyelitis, neonatal septicaemic endocarditis and, in the worst cases, streptococcal toxic shock syndrome (TSS) [7-9].

Presentation of the case

A 93-year-old woman with a history of hypertension, heart failure with reduced ejection fraction, and chronic atrial fibrillation with pacemaker presented with symptoms of worsening edema and erythema of the lower limbs for two days before admission. At her initial presentation, she was afebrile, hypotensive with a blood pressure of 68/35 mmHg, tachycardic with a heart rate of 90, tachypneic with a respiratory rate of 33 breaths per minute, and hypoxic with an oxygen saturation of 86% at Ambiant air. The patient was awake but confused, the pupils were equal and responsive to light, auscultation of the lungs revealed scattered bilateral rales, and she had 2+ pitting edema from the lower extremities to the knees. There was also visible erythema, warmth and tenderness on palpation of the left lower extremity. The patient’s white blood cell count was 5.92 K/Ul (5-10 K/Ul) and she had thrombocytopenia with platelets of 89K/Ul (150-400k/Ul). His lactate was elevated at 4.6 mmol/L (0.5-2.2 mmol/L) as well as his pro-calcitonin at 3.95 ng/ml (

Based on her clinical presentation, the patient met systemic inflammatory response criteria (SIRS) for sepsis due to cellulitis. The patient was found to be hypoxic based on partial pressure of oxygen (PO2) and transitioned from nasal cannula to positive airway pressure at two levels. His blood pressure did not respond well to boluses of intravenous fluids (IVF) and so required placement of a right internal jugular catheter and was started on norepinephrine, vasopressin, phenylephrine and epinephrine to maintain a target mean arterial pressure (MAP) of 65-70 mmHg. On the first day of admission, she was started on piperacillin/tazobactam, vancomycin and clindamycin for broad-spectrum antibiotic coverage against cellulitis. Transthoracic echocardiography showed severely reduced left ventricular systolic function with an ejection fraction (LVEF) of 25-30% and severe left ventricular global hypokinesia and severe tricuspid regurgitation and severe mitral valve regurgitation. Because the patient had a reduced left ventricular ejection fraction (LVEF), she was started on supplemental dobutamine for potential cardiogenic shock in addition to her septic shock.

On the second day of admission, the patient was intubated for airway protection and placed on a fentanyl and midazolam infusion to maintain adequate sedation from a RASS (Richmond Agitation Sedation Scale) target down to -4 since the patient was breathing through the vent. His blood cultures (aerobic and anaerobic bottles) were positive for group C Streptococcus. She was seen for an infectious disease and her antibiotics were changed to meropenem, clindamycin and additionally she was treated with IVIG (1 g/kg on day one, followed by 0.5 g/kg on day two and three) for streptococcal toxic shock syndrome, which was initiated on the second day of admission (Figure 1).

Figure
1: Trend in white blood cell count after initiation of IVIG on day 2

The patient had worsening lower extremity edema with blistering and therefore general surgery was consulted for a fascial cut to exclude necrotizing fasciitis. However, there was no evidence of tissue breakdown with the fascial cut. Wound cultures were negative for bacterial infection. She continued meropenem for 14 days to treat bacteremia. His stay in intensive care was complicated by a retroperitoneal hemorrhage requiring blood transfusions. On day 29 after admission, she had a percutaneous endoscopic gastrostomy (PEG) tube and tracheotomy because she failed her swallowing assessments and spontaneous breathing trials. Unfortunately, her clinical condition worsened following the aggravation of a cardiogenic shock refractory to medical treatment and she died on day 46 after her admission.

group A Streptococcus and Staphylococcus aureus are usually associated with TSS [7-9]. These gram-positive cocci release exotoxins, which act as superantigens, activating the immune system with a significant release of cytokines triggering the inflammatory response. SDSE has virulence determinants like Streptococcus pyogeneswhich includes streptolysin O, streptolysin S, antiphagocyte protein M and the exotoxins responsible for TSS [10]. This condition usually presents with signs of infection associated with skin irritation, blistering, and signs of cellulitis. Patients can very quickly develop signs of sepsis with hemodynamic compromise resulting in multi-organ failure and, in the worst case, fatal death. SDSE TSS has a very high mortality rate of 15%. The incidence of group C/G bacteremia was estimated at 5.5 per 100,000 population in population-based surveillance in British Columbia, Canada, from 2011 to 2018, which identified 210 episodes of bacteremia due to beta-hemolytic streptococci. [11].

Group C and Group G Streptococcus are sensitive to beta-lactam antibiotics such as penicillin G, third generation cephalosporins and, for those hypersensitive, to vancomycin, macrolides and clindamycin. The duration of antibiotic treatment depends on the type of infection, seven to 10 days for cellulitis, 14 days for bacteremia, 14 to 28 days for severe invasive soft tissue infection, 28 to 42 days for osteomyelitis, l septic arthritis and endocarditis.

The use of IVIG in toxic shock syndrome has been shown to increase the plasma superantigen neutralizing activity and therefore reduce the production of interleukin-6 and tumor necrosis factor alpha by the T cells [12]. In a randomized, double-blind, placebo-controlled European trial that took place in 1999 regarding the use of IVIG in patients with streptococcal TSS, 120 patients were randomized to receive IVIG versus a placebo. [13]. The trial was terminated prematurely due to slow patient recruitment and data were only available for 21 patients (11 patients received IVIG and 10 patients received placebo). There was a 3.6-fold higher 28-day mortality in the placebo group compared to the IVIG group, although statistical significance was not reached due to small sample size. However, there was clinical significance in patients receiving IVIG, which was evident from a decrease in the Sequential Organ Failure Assessment (SOFA) score, which is used to assess the incidence of dysfunction. /organ failures in intensive care units.

Our patient had a history of multiple risk factors including her age, hypertension, and history of heart failure with an implantable pacemaker and chronic lower extremity edema. The infection due to the breakdown of his skin in his lower limb probably caused cellulitis, bacteremia and TSS. She survived for up to 46 days after admission, possibly due to timely initiation of IVIG as an add-on therapy in addition to antibiotics.

TSS from SDSE can lead to serious life-threatening complications, including multi-organ failure and death. SDSE is greater in elderly patients with pre-existing comorbidities. Our patient showed no clinical improvement despite initiation of several vasopressors and broad-spectrum antibiotics which raised suspicion of TSS. IVIG was initiated as an add-on treatment with antibiotics. One could only speculate that the use of IVIG prolonged the survival of our patients. We therefore emphasize prompt diagnosis and treatment with antibiotics, IVIG, and surgical consultation to rule out necrotizing fasciitis in appropriate patients to help prevent disease progression and mortality.

Minnesota Vikings Kirk Cousins ​​- “What is the F%&K?”