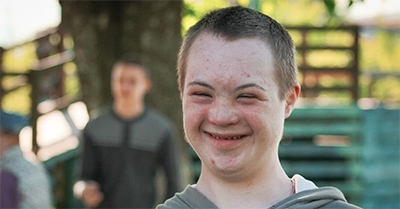 April 27, 2022 | Researchers know that Down syndrome is caused by an extra chromosome, but no one knows for sure why the condition occurs or how many different factors play a role. The age of the mother is a factor that increases the risk of having a baby with Down syndrome. Women who are 35 or older when they become pregnant are more likely to have a pregnancy affected by Down syndrome than women who become pregnant at a younger age. However, the majority of babies with Down syndrome are born to mothers under the age of 35, as there are many more births to younger women. A person with Down syndrome typically has a short neck, a flattened facial profile, and upward slanting eyes. Due to low muscle tone, a child with Down syndrome may be slow to learn to roll over, stand, and walk. Despite these delays, children with the disease can learn to participate in physical activities like other children.

April 27, 2022 | There are several screening tests that a pregnant woman can undergo to determine if her child will have Down syndrome. Diagnostic testing is usually done after a positive screening test to confirm a diagnosis of Down syndrome. Dr. Bradley Schaefer, director of the medical genetics division at UAMS, explains that these tests look for changes in the child’s chromosomes that would indicate he has the disease. Tests include chorionic villus sampling, or CVS, which examines material from the placenta, and percutaneous cord blood sampling. Amniocentesis involves examining the amniotic fluid found in the sac surrounding the baby. According to Dr. Schaefer, many people with Down syndrome have the common facial features and no other major birth defects. However, some people may have one or more major birth defects or other medical problems, such as hearing loss, sleep apnea, or eye disease.

April 27, 2022 | Cognitive impairment, problems thinking and learning, are common in people with Down syndrome and usually range from mild to moderate. Most children with Down syndrome develop the communication skills they need, although it may take them longer than other children. Early and ongoing speech and language interventions to encourage expressive language and improve speech are particularly helpful. Because it is a lifelong condition, early services will often help babies and children with Down syndrome improve their physical and intellectual abilities. Most of these services aim to help children develop to their full potential. These services include speech therapy and physical therapy, and they are generally offered through early intervention programs in each state. Children with Down syndrome may also need extra help or attention at school, although many children are included in regular classes.

Recognized by thousands of listeners each week, T. Glenn Pait, MD, began offering expert advice as the host of UAMS’s “Here’s to Your Health” program in 1996. Dr. Pait has started working at UAMS in 1994 and has been practicing medicine for over 25 years.