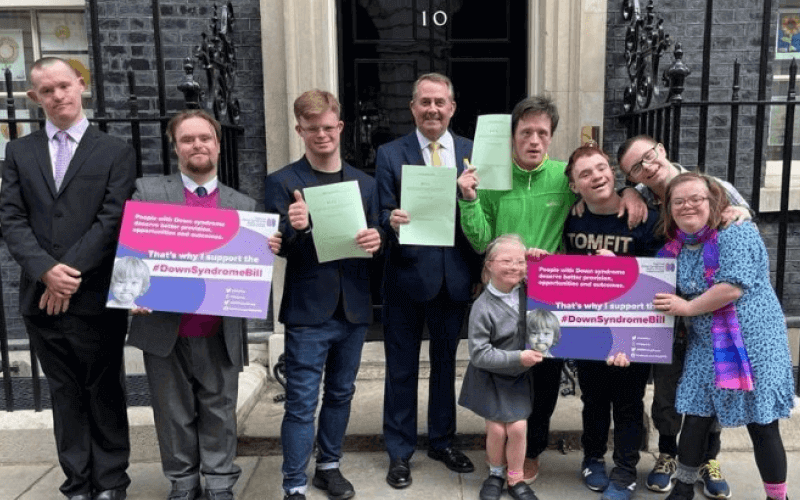 Campaigners with learning disabilities have raised serious concerns about a ‘very weak’ and potentially divisive bill that has been passed by parliament and aims to improve support for people with Down syndrome.

MPs and their peers have approved the government-backed private member’s bill proposed by former Conservative Defense Secretary Dr Liam Fox despite significant concerns about its content and purpose.

The Down Syndrome Bill contains just a few simple clauses and will ensure that boards and other relevant public bodies – such as NHS trusts and schools – take due account of the new guidance, but it does not provide any new funding .

The guidance – which will be published by the government – will explain the measures that it would be “appropriate” for the public body to take to meet the needs of people with Down syndrome in its area in terms of social protection, health, education and lodging.

Heidi Crowter, a disability activist with the National Down Syndrome Policy Group who has been instrumental in pushing the bill forward, said she was “so happy” the “fantastic” bill became law.

On her blog, she said she was so passionate about the bill “because I am someone who has Down syndrome and I am living proof that people with Down syndrome with the support and proper care can live [a] fun life”.

But other activists with learning disabilities have criticized the bill.

People with intellectual disabilities who are members of the Covid-19 Support and Action Group, set up by disability organizations People First (Self Advocacy) and Change, discussed the bill last month.

They said their main response to the bill was to ask “why” it was necessary.

“In fact, there was very little consultation or communication about this before it was introduced as a bill.

“This is not to say that people with Down syndrome do not or should not support the bill, but it does concern us as to why the Down syndrome bill is believed to is necessary.

“Why do public bodies only need counseling for people with Down syndrome and not for other people with learning difficulties or disabilities?

“It’s a very backward step. It focuses on a person’s diagnosis and condition; it is a question of distinguishing between a diagnosis and a condition.

“It does not reflect the values ​​and principles of the social model of disability. We are also concerned that it may compromise the rights of others.

“Does that mean we have to have a bill (special guidance) for every diagnosis and condition? »

The group added: “The case for the bill seems very weak.

“In our view, he is weak and unnecessary and at worst divisive.”

The Baroness, the disabled Liberal Democrat peer [Sal] Brinton told his peers on Friday that the bill had raised the profile of Down syndrome, which was “a good and long overdue thing.”

But she highlighted the risk that it could create a “hierarchy of learning disabilities” in a context of “limited resources”.

Last month, during the Bill’s second reading, Baroness Brinton, deputy chair of the Local Government Association, said she was concerned that this new hierarchy “risks undermining the rights of other disabled people, especially people with learning disabilities, which can also be discriminatory”.

She said, “I know that by giving one group rights when resources are scarce, others won’t get them.

She also raised concerns that the bill represented “a politically regressive step, advancing a medical model of disability and elevating diagnosis above individual needs” and “would create legal complexity and considerable regulatory burden for local councils, the NHS and schools at a time when they are already strained to meet their statutory obligations”.

In second reading, the green baroness peer [Natalie] Bennett had expressed concern that the bill’s obligations “demand very little from public bodies”, “attract no new funding” and “provide no meaningful mechanisms for enforcement or redress”.

The young Minister of Health and Social Affairs Lord [Syed] Kamall told his peers last month that the bill was “not about improving the rights” of people with Down syndrome, but was about “ensuring that these identifiable and unique needs are not overlooked when planning, design and service delivery”.

He told his peers on Friday: ‘The bill does not remove obligations under the Equality Act 2010 for competent authorities to assess all the needs of people to whom they provide support.

“Our assessment is that prioritizing funding and resources for people with Down syndrome over other groups without a proper assessment of people’s needs would be considered illegal.”

He said the government would ‘consult a wide range of stakeholders in developing the guidance, including those with other conditions’ and that ‘people with lived experience will be at the heart of this at every stage of its development. “.

Photo by National Down Syndrome Policy Group: Liam Fox (center, with yellow tie) and supporters of the bill, including Heidi Crowter (far right) outside 10 Downing Street

A note from the editor:

Please consider making a voluntary financial contribution to support the work of DNS and enable it to continue to produce independent, carefully researched reporting that focuses on the lives and rights of people with disabilities and their user-led organizations.

Please do not contribute if you cannot afford it, and please note that DNS is not a charity. It has been managed and owned by disabled journalist John Pring since its launch in April 2009.