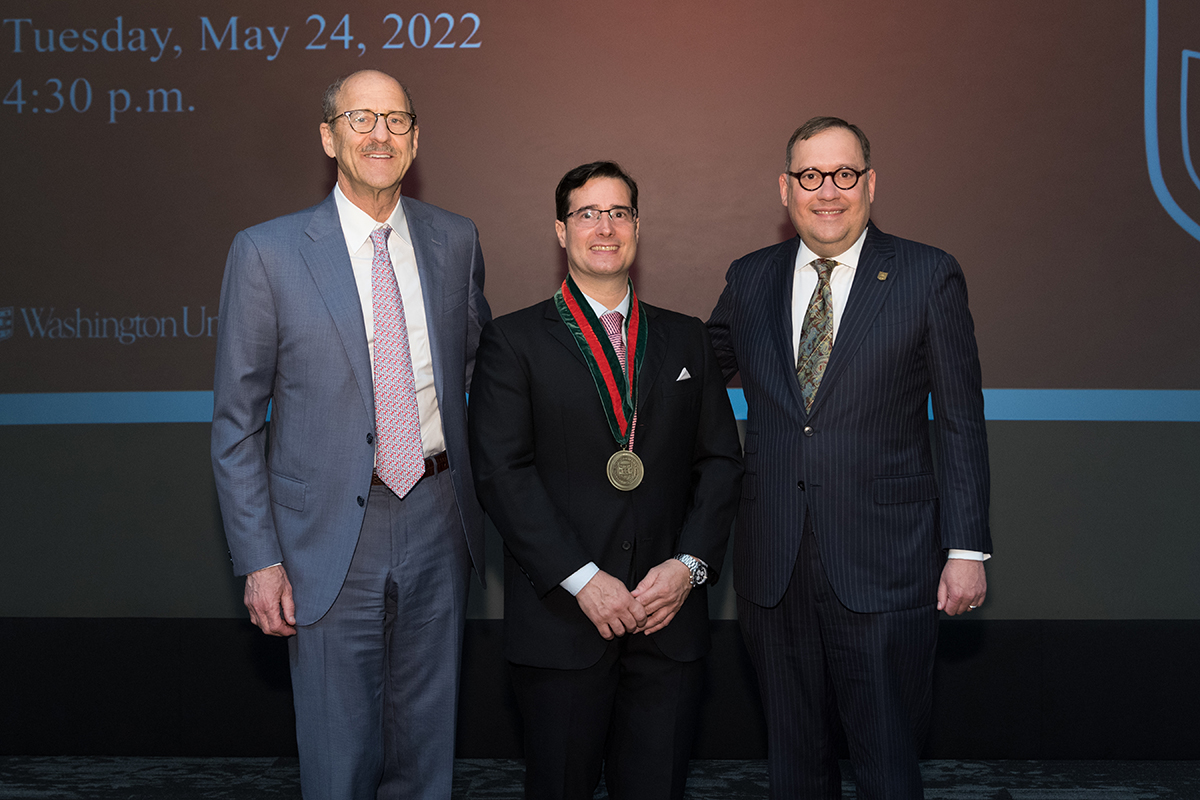 Carlos Cruchaga, PhDa pioneer in using human genomic data to understand and elucidate the biology of neurodegenerative diseases such as Alzheimer’s disease, was named the inaugural Barbara Burton and Reuben M. Morriss III Professor at Washington University School of Medicine in St. Louis.

The chair was established through a bequest from the late Reuben M. Morriss III and Barbara Burton Morriss to the University of Washington, to advance research on Alzheimer’s disease.

“The Morrisses were dedicated members of the St. Louis community, and their investment in Washington University and specifically in Alzheimer’s disease research has created three endowed chairs named after them,” Martin said. “Through their generous gift to the university, they will continue to have a powerful impact on research and teaching at the university in perpetuity.”

Perlmutter added, “We are deeply grateful to Barbara and Reuben Morriss for investing in the University of Washington and in our work to advance the understanding and treatment of Alzheimer’s disease. We look forward to future discoveries from the Cruchaga lab as Carlos combines complex technologies to identify genetic variants that may contribute to Alzheimer’s disease, Parkinson’s disease and other devastating disorders.

Cruchaga’s research focuses on harnessing data from genetics, genomics and other omics and integrating this information with findings from neuroimaging and neuropathology to identify new genes, pathways biologics, molecular biomarkers and drug targets likely to generate new approaches to diagnose and treat neurodegenerative diseases.

“Carlos came to the University of Washington as a postdoc to study the genetics of neurodegenerative diseases,” said Charles F. Zorumski, MDProfessor Samuel Guze and Head of Department of Psychiatry. “In 2014, Carlos became the head of the genetics group at Knight Alzheimer’s Disease Research Center (CCRA) and the Hope Center for Neurological Disorders in the Department of Neurology. And last year he became the founding director of the Center for Neurogenomics and Informaticspioneering approaches to improving understanding of the causes and potential treatments for these devastating diseases.

Cruchaga has published over 270 manuscripts and is the principal investigator of six grants funded by the National Institutes of Health (NIH). He is a key leader of the International Dystonia Coalition Biobank and Genetic Core; the Aging Adult Brain Connectome Project; Alzheimer’s Biomarkers Consortium-Down Syndrome; the Knight ADRC Genetic Core; and the Genetic Core of the Dominantly Inherited Alzheimer Network (DIAN).

Cruchaga obtained his doctorate in biochemistry and molecular biology in 2005 at the University of Navarre in Pamplona, ​​Spain. As a postdoc, he trained in quantitative human genomics in the lab of Alison Goate, DPhil, at the University of Washington. He established his own lab in 2011. His primary focus has been to leverage genetics, multi-omics, and functional genomics studies in neurodegeneration and central nervous system diseases and translate them into improvements in human health. by better understanding the molecular basis of the disease. .

“It’s quite an honor to have our work recognized in this way,” said Cruchaga. “We tried to leverage a wealth of information to identify treatments that could make a big difference in the lives of millions of people with Alzheimer’s disease and other neurodegenerative disorders. This endowment allows us to advance this work, to help patients and to give hope to those affected by certain very difficult diseases.

A graduate of Saint Louis Country Day School in Ladue, Mo., and Princeton University in New Jersey, Reuben Morriss III earned a law degree from the University of Washington in 1964. He joined Boatmen’s Bank , beginning a long career as an executive of the St. Louis financial sector. He eventually became chairman and president of Boatmen’s Trust Co., a position he held until his retirement in 1995. He served as chairman of the board of trustees of Mary Institute and Saint Louis Country Day School and the William Woods University in Fulton, Mo. He has also served on the boards of St. Luke’s Hospital in Chesterfield, Missouri, and the bi-state American Red Cross in St. Louis.

Barbara Burton Morris was a graduate of John Burroughs School in Ladue and Briarcliff College in Westchester County, NY. She was a board member of the Alzheimer’s Association and the Central Institute for the Deaf, and she donated her time and resources to many other local charities and cultural institutions.

The couple were married for 48 years and had two children, Burton Douglass Morriss and Barbara Dulany Morriss; and five grandchildren. Reuben Morriss III died in 2006 and Barbara Burton Morriss died in 2018.