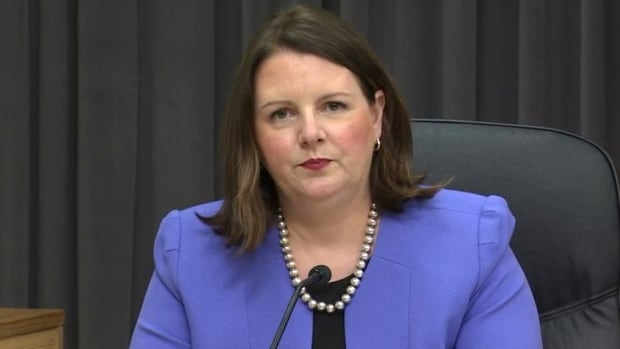 A Nova Scotia man has filed a lawsuit against New Brunswick’s top doctor for his handling of the investigation into a mysterious neurological syndrome.

Steve Ellis, whose father, Roger Ellis, was initially identified as one of 48 confirmed cases of the mystery syndrome first made public a year ago, alleges that Dr. Jennifer Russell “violated the code of ethics of his profession” during the investigation.

He alleges that Russell “did not communicate transparently”, “mislead my father as a patient”, “hid information that my father had a right to obtain” and provided inaccurate information to the families during a private meeting “initiated by his office and [Health] Minister Dorothy Shephard.”

Ellis also alleges that her father was never seen in person by the Oversight Committee who then took over the investigation, although they later suggested several “possible” explanations for his symptoms.

The complaint was filed with the College of Physicians and Surgeons of New Brunswick on Thursday.

Asked about the complaint and its allegations on Friday, public health spokesman Bruce Macfarlane said Russell “has not yet received any correspondence related to this type of complaint.”

A report calls into question the existence of a mysterious disease

Teams of researchers and scientists have come together to study the syndrome, both nationally at Health Canada’s Creutzfeldt-Jakob Disease Surveillance System and provincially with a research team led by Moncton neurologist, Dr Alier Marrero.

However, public health officials later issued a report questioning the existence of such a syndrome.

They appointed an oversight committee made up mainly of neurologists from across New Brunswick to do clinical examinations of the 48 patients and produce a second report.

This committee reviewed patient records and found that although some had unusual symptoms, they did not have a common, unknown illness.

“The Oversight Committee unanimously agreed that these 48 individuals should never have been identified as having a neurological syndrome of unknown cause and that, based on the evidence reviewed, no such syndrome exists,” Russell said at a Feb. 24 press conference. year.

Ellis said that was the day he started filing a formal complaint against Russell.

No definitive diagnosis, no test for BMAA

Ellis said he was troubled that although the oversight committee said there were several “potential alternative diagnoses” for 41 of the 48 patients, they did not provide a final diagnosis for any of them.

“My father’s letter and the letter of all the others [from the committee] never gave a definitive diagnosis. It says “we think, we believe”… but it doesn’t say “you are diagnosed with X, you have X”.

“For six neurologists to suggest that a patient has one, two, three or more diseases and never sees them – that’s not how it works.”

He is also upset that no tests have ever been done to determine if blue-green algae and B-methylamino-L-alanine (BMAA) could have been a factor behind the patients’ symptoms.

Early in the investigation of the disease, BC neurologist Dr. Neil Cashman also identified BMAA as one of several possible culprits.

At that time, Cashman was acting as an advisor to Health Canada’s Creutzfeldt-Jakob disease surveillance system, which was one of the teams working to identify a cause for the mystery illness.

“This is all just speculation at this point,” Cashman pointed out at the time. “It will take a lot of scientific insight to identify it as a cause.”

In a private meeting with the families, which Ellis said he recorded, he asked Russell why no such test had been done.

“What she told us was that they didn’t need to test for the BMAA and they weren’t able to test on the streams because there is no there was no algae bloom last summer,” he said.

Ellis disputes that, noting that Irishtown Park in Moncton was closed in July due to blue-green algae blooms.

“And that’s in the area where a lot of the cases are concentrated. We don’t know for sure it’s the BMAA, of course, but how do you know if you don’t rule things out? You have to test .”

Ellis asked Russell to submit to the College of Physicians and Surgeons “all correspondence she had with the organizations she listed during the meeting she had with patients on February 24, 2022” and “any documentation she received from treating physicians in the province through March 24, 2022…which identifies the concerns of patients who exhibit atypical signs of neurological diseases/diseases.”

The College of Physicians and Surgeons would not comment on the complaint or the next steps in the process.

“We never discuss complaints, either to confirm or deny,” Registrar Dr. Ed Schollenberg said in an email Friday.

“I left without a trophy” after a tie with Lia Thomas