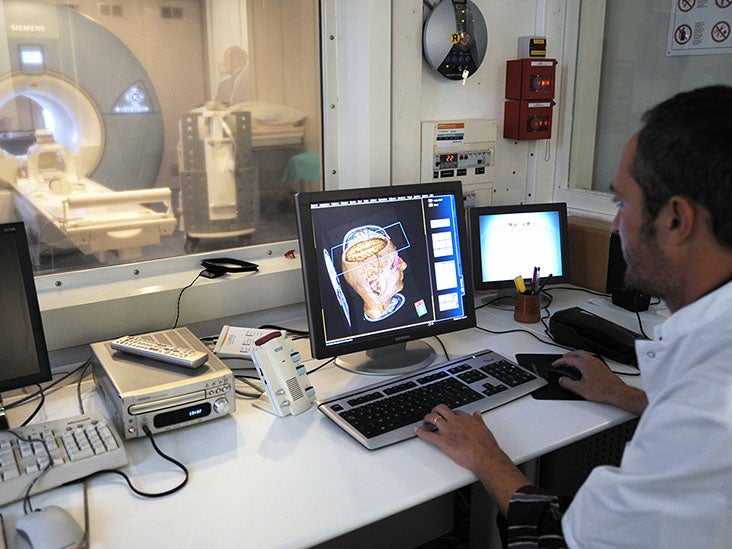 Dementia is, according to the World Health Organization, the deaths worldwide. The most common form, affecting of those with a diagnosis of dementia, is Alzheimer’s disease.

People suspected of having Alzheimer’s disease usually undergo several tests to diagnose the disease. During the assessment, the person:

However, these diagnostic tests may not be accurate, have limited availability, or take a long time, during which the disease could progress without treatment.

The researchers developed an algorithm based on those used to classify cancerous tumours. After dividing the brain into 115 regions, they assigned 660 characteristics, such as shape, size and texture, to each region. They trained the algorithm to predict Alzheimer’s disease by identifying changes in these features from a single standard MRI.

They tested their method on brain scans of more than 400 patients as part of the Alzheimer’s Disease Neuroimaging Initiative. These patients had early or advanced Alzheimer’s disease and were compared with healthy controls and patients with other neurological disorders.

They then tested it using data from 80 patients undergoing diagnostic testing for Alzheimer’s disease at Imperial College Healthcare NHS Trust.

“This new research approach uses machine learning and MRI scans to try to identify biological brain changes early in the Alzheimer’s disease continuum. That being said, this research is in its early stages and not ready to be used as a standalone diagnostic tool.

When tested on an external dataset, the algorithm still detected 86% of Alzheimer’s cases, a figure higher than previously published studies.

Dr. Anton Porsteinsson, professor and director of the Alzheimer’s Disease Care, Research and Education (AD-CARE) program at the University of Rochester Medical Center, praised their findings:

“Their method appears to be highly predictive in this population and adds to the number of imaging techniques and fluid biomarkers that make the diagnosis of dementia more accurate.”

The researchers suggest that their method of analysis and algorithm could be an alternative to invasive CSF measurements.

However, Dr. Porsteinsson said Medical News Today“There is intense exploration going on right now to find the most practical yet accurate biomarkers for diagnosis, prognosis, and possible treatment outcomes in Alzheimer’s disease and related dementias. This study suggests that the authors’ technique may find a role here, but the competition is formidable, especially fluid biomarkers.

Because the new method can detect early changes in Alzheimer’s disease, it could lead to earlier diagnosis, allowing treatments to begin before symptoms become life-changing.

“Waiting for a diagnosis can be a horrifying experience for patients and their families. If we could reduce the waiting time, simplify the diagnostic process and reduce some of the uncertainty, that would help a lot,” Prof Aboagye said.

Commenting for DTMDr. Edelmayer agreed: “[T]his research focuses on an important issue in Alzheimer’s disease: early detection. With the FDA’s fast-tracking approval of the first Alzheimer’s disease-modifying amyloid therapy and more to come, it is critical that people with Alzheimer’s disease be diagnosed early in the disease process. when treatment may be most beneficial.

Biogen’s Aduhelm (aducanumab) is the treatment Dr. Edelmayer is referring to, for which the FDA has granted in 2021.

Here’s how it could impact fertility treatments and IVF