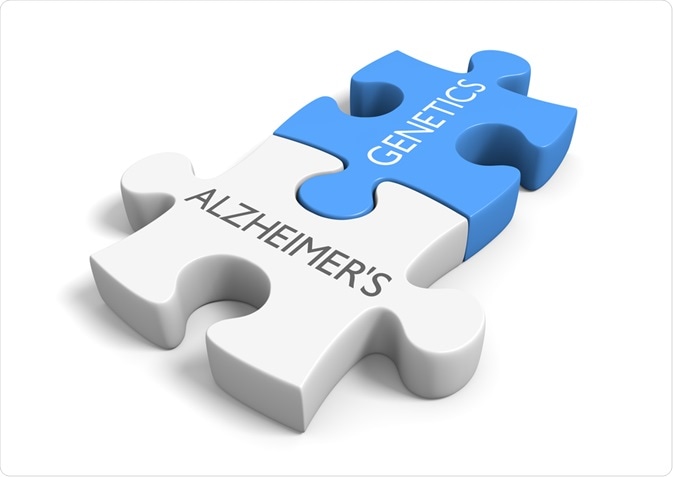 Alzheimer’s disease (AD) is a progressive neurodegenerative disease that is also the most common cause of dementia in older people. In most cases, it leads to severe functional deterioration and loss of autonomy.

A tenth of people over 70 suffer from cognitive impairment in the form of memory loss, and it is estimated that about half of them will have AD. This percentage increases to somewhere between one in four and one in two over the age of 85. Most of these patients will live with dementia for less than a decade.

In both of these types, some people have a family history of AD. About 60% of patients with AOD have multiple family members with AD, more than one in ten of whom have autosomal dominant inheritance over three or more generations. In some cases, families with late-onset disease have experienced cases of early-onset AD (EOAD).

The beta-amyloid protein involved in the pathogenesis of AD is a peptide of 42 amino acids (Aβ42). It is one of the many fragments created from the amyloid precursor protein (APP), such as Aβ40, after cleavage by secretases.

APP is an integral type I membrane protein found in several tissues but highly expressed in neural synapses. Although its function remains unknown, it is likely to regulate the formation and traffic of impulses through synapses.

A few autosomal dominant families have shown mutations in single genes. For example, a family in Colombia had over a thousand members with a single mutation that causes EOAD. This led to the identification of the APOE gene as a risk factor.

Several genes have been associated with autosomal dominant AD, but are responsible for less than one percent of cases.

“Much of the heritability of AD remains unexplained by currently known genes for the disease. “Lars Bertram

The APP gene is on chromosome 21q, the same one involved in Down syndrome via trisomy. Patients with Down syndrome develop AD in their early 40s, with visible amyloid deposits.

Over 30 missense mutations have been found close to the Aβ peptide sequence in APP, primarily affecting the secretase cleavage sites or transmembrane domains on exons 16 and 17. These mutations, such as the Swedish mutations and Londoners, are responsible for 10-15% of early-onset familial AD (EOFAD), mostly within specific families, with AD presenting in mid-40s.

EOFAD mutations primarily cause an altered proportion of Aβ42 levels relative to other Aβ isoforms.

Another type of AD involves about 180 missense mutations of PSEN1 in about 400 families. These affect the gene at position 14q24.2 which encodes a major part of the complex required for cleavage of γ-secretase from APP. These represent 18% to 50% of autosomal dominant EOFADs.

Mutations in PSEN1 appear to favor the formation of Aβ42 over that of Aβ40, thus leading to lower levels of γ-secretase activity. This oligomer-forming peptide could thus be an early biomarker of AD at the preclinical stage. However, these mutations are associated with the more severe forms of AD, being seen in each generation and at an early age, or even 30 years in some cases.

Features of AD associated with PSEN1 include not only dementia, but parkinsonism. Some families with such mutations also exhibit limb spasticity and seizures.

Mutations in PSEN2 on chromosome 1 have also been identified but are rarely the cause of EOFAD and cause AD that appears later than PSEN1. Like the PSEN1 mutations, these exhibit alternative splicing and are part of the secretase cleavage complex. They appear to cause greater phenotypic variability in patients from affected families, perhaps because environmental factors play a larger modifying role.

Currently, 24 APP mutations, 185 PSEN1 mutations and 13 PSEN2 mutations have been reported. All of these cause the Aβ42: Aβ40 ratio to increase, and one of them increases the levels of several types of amyloid, including Aβ, thereby causing the aggregation of Aβ. Aβ42 is more likely to form oligomers and possibly amyloid fibrils compared to Aβ40.

Neurofibrillary tangles due to hyperphosphorylation of the tau protein are also common in the brains of patients with AD. This protein associated with microtubules forms insoluble aggregates after phosphorylation.

Over 90% of ADs are sporadic cases of LOAD, apparently resulting from interactions between several genes and environmental factors. The immediate relatives of patients with late-onset disease do not exhibit a Mendelian mode of transmission.

No single gene has yet been identified that can be blamed for this condition. Several variants of the apolipoprotein E (APOE) gene on chromosome 19q13.2 have been associated with sporadic CHARGE. Yet other interacting risk factors are undoubtedly involved since the APOEε4 risk allele is present in many people who live to 90 years or more.

This gene is the key to the metabolism and distribution of cholesterol and triglycerides in the human body, and the APOE ε4 allele is linked to higher blood cholesterol levels. It is believed that the three APOE ε4 alleles (ε2, ε3 and ε4) potentially cause amyloid aggregation and tau hyperphosphorylation.

This gene is the most important risk factor for LOAD, but its APOE ε4 allele is neither essential nor sufficient to cause AD. Rather, it reduces the age of onset of AD in a dose-dependent manner.

In the brain, apoE is needed to remove bad fats from the circulation in order to break them down. However, when bound to lipids in the brain, apoE attaches to beta-amyloid aggregates, depending on the specific isoform, which promotes the elimination of Aβ.

Individuals with APOE ε4 exhibit higher levels of amyloid and tangles, with more mitochondrial damage. The number of copies of this allele is proportional to the risk of AD in individuals over 65 years of age with a positive family history of the disease.

Conversely, the APOE 3/3 profile increases the risk of developing AD at age 90 by three or more than a single APOE ε4 allele, suggesting the crucial role of other factors than APOE alone. The risk in family members of an individual homozygous for APOE ε4 (which is rare) is 44% by the age of 93, again demonstrating that half of people carrying one or more copies of this allele are spared by AD.

The ε4 / ε4 genotype carries the greatest risk of AD among people with a positive family history. It is found in about one percent of Caucasians, compared to one in five in family-dependent, black and Hispanic communities in the Caribbean.

About 40% of people with LOAD do not even have an ε4 copy of the apoE gene, while those with a copy have a lower risk of AD by the age of 87. With LOAD, first-degree relatives have a one in four to one in five lifetime risk of AD, compared to one in ten in the rest of the population.

Women have a 45% chance of developing AD by the age of 73 with this ε4 / ε4 genotype, but only one in four men. Other nearby genes have been suggested to cause a higher risk of AD, but this is considered less likely than involvement of APOE itself.

Overall, 15 genes show GWAS significance, but variants that ameliorate or cause disease are only known for four: APP, PSEN1 and PSEN2 for EOFAD and APOE for LOAD.

Many other genes show technically significant associations with an increased risk of AD, ten of which have the strongest links. These include SORL1 (sortilin-bound receptor), ACE (angiotensin-converting enzyme 1) and interleukin 8 (IL8).

Using the Whole Genome Association Study (GWAS), up to one million genetic markers (single nucleotide polymorphisms, SNPs) have been tested for the risk of AD, producing ATXN1 (ataxin 1) and CD33 (siglec 3), among others. Scientist AD Tanzi identified APOE and CD33 as the only genes that showed GWAS significance among families and case-control series. Both protective and high risk single nucleotide changes have been reported.

Caterina Scorsone marks the first day of Pippa, her 4 and a half year old daughter: “Little girl started school”